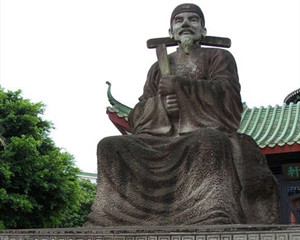 Mr. Hai Gangfeng, 1 the highest-ranking official of the Central Censorate, 2 passed away in his official residence. The only person from his hometown in Nanjing was an official called Su Huaimin in the Ministry of Revenue. 3 When Su checked the possessions and property Mr. Hai had left behind, he found nothing except eight taels of silver (his salary), several meters of plain cloth and a few pieces of some worn-out clothes in a bamboo container. Where can people find one more such Grand Censor? Wang Shizhen, Minister of Justice of his time, made his comment by saying, “He did not fear death, nor did he take a fancy to money, or from a clique with anyone.” Wang's words properly summarized Hai Rui's life. Even if thousands of words could be used to praise him, no other comments could surpass this one.

1. Hai Gangfeng (1514-87), better known as Hai Rui, was a famous Chinese official during the Ming Dynasty. His name has come down in history as a model of upright morality, scrupulous honesty, fairness and integrity in office.

2. It pinyin is Ducha Yuan, the top-level central supervisory agency in ancient China. Officials working there were known as censors. They were directly accountable to the emperors and served as the “eyes and ears” to check the top-level officials to prevent corruption.

3. It is equivalent to today's Ministry of Finance.